In May, AHIP and the Blue Cross Blue Shield Association (BCBSA) announced the results of a study and analysis regarding the impact of the No Surprises Act (NSA).

The survey defined a surprise medical bill as:

Based on surveyed claims data from the first two months of 2022, the study concluded that the NSA prevented more than 2 million potential surprise medical bills among all commercially insured patients. Should the trend hold, more than 12 million surprise bills will be avoided in 2022 due to the NSA. No specific estimate, however, was provided with respect to plans that are self-insured, and the data is limited to claims that would not otherwise be subject to a state surprise billing law.

This study revealed that there were 600,000 NSA-eligible claims in the commercial insurance market in January and February 2022. That is .23% of all commercial claims. However, due to the substantial delay in claims processing, the study estimated that the actual number of NSA-eligible claims exceeded 2 million during the first two months of 2022.

What Does That Mean for Plan Sponsors?

Based on past studies, this could have a significant impact on plan benefits because:

Participants will initially see a modest reduction in point of purchase cost sharing. However, as the cost of coverage increases, expect both employer and employee-paid contributions to increase.

Responding to Changes that Increase the Cost of Coverage

How have plan sponsors responded to increased coverage costs in the past? In general, point of purchase cost sharing has not kept pace with inflation. Participants have largely been insulated from health care inflation. Instead, plan sponsors have shared the increased cost of coverage with participants through higher employer and employee contributions. 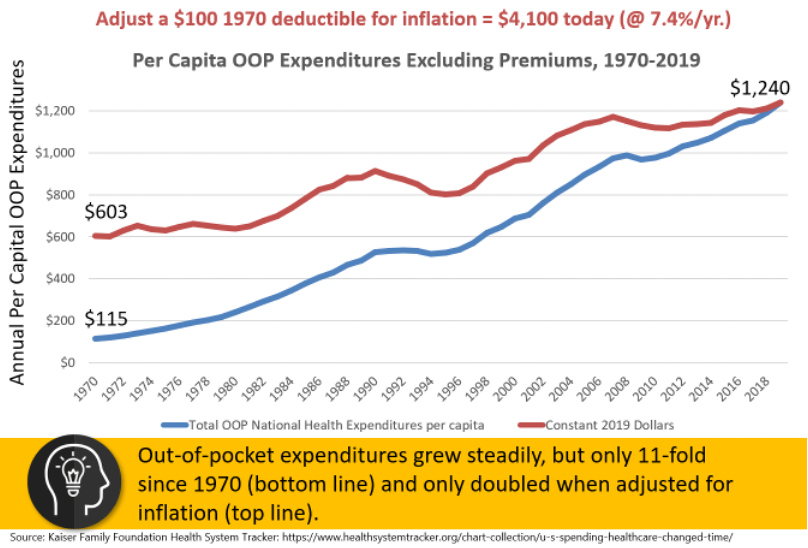 So, a compliance-only approach is likely to result in the following:

Plan sponsors should take strategic action – changes that go far beyond simple compliance to ensure that their employer-sponsored, self-insured plans incorporate the most effective strategies available today for the “health and wealth” of their participants. A strategic response could include design changes that would return you plan to the intended levels of cost sharing – while also securing the benefits of the No Surprises Act for participants.

You could wait five years and look back to see whether the cost sharing pattern of the past five decades continues – or worsens! Or you could respond strategically today.