At the extreme, Switzerland, Spain, and France had a life expectancy for women born in 2020 of 85 years. The comparable figure for the U.S. was 80 years. Overall, Norway, Switzerland, Sweden, Italy, Netherlands, Spain, Denmark, Austria, France, Germany, England and Wales, Greece, Belgium, Portugal, Chile, and the Czech Republic, all had higher life expectancies for women born in 2020 than the U.S. 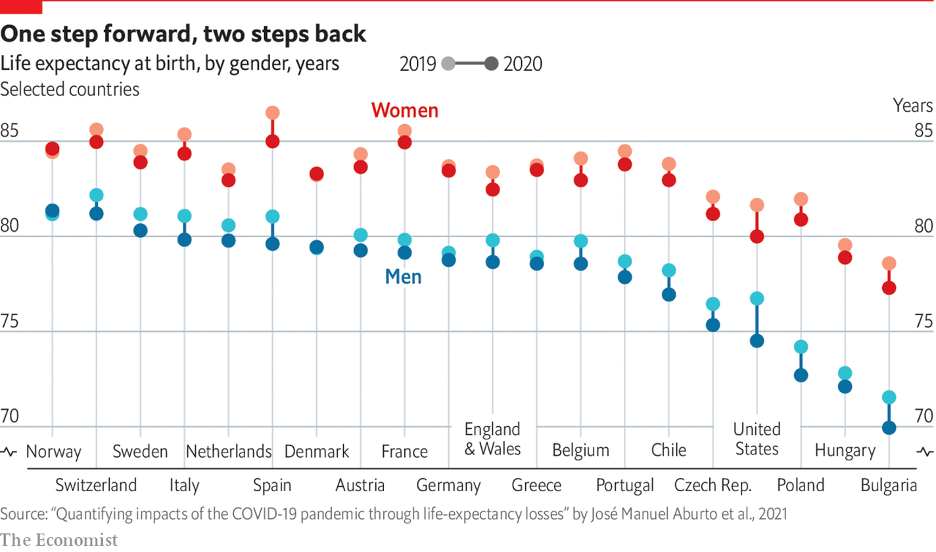 While not consistently collected and calculated across nations, infant mortality is another measure used to access healthcare.  “The mortality rate in the United States was 5.44 in 2020. This rate was 50th among the 195 countries and territories measured, and significantly higher than in dozens of other developed countries such as Sweden (2.15), Japan (1.82), and Australia (3.14).”[5]

“The United States has one of the highest costs of healthcare in the world. In 2020, U.S. healthcare spending reached $4.1 trillion, which averages to over $12,500 per person. By comparison, the average cost of healthcare per person in countries in the Organization for Economic Co-operation and Development (OECD) is only about one-third as much. The COVID-19 pandemic exacerbated the trend in rising healthcare costs. In 2020, the year-over-year increase in national healthcare costs as a share of gross domestic product (GDP) was over 2 percentage points — the largest increase since 1960. However, healthcare spending had been increasing long before COVID-19 began. Relative to the size of the economy, healthcare costs have increased over the past few decades, from 5 percent of GDP in 1960 to 18 percent in 2019 (before COVID-19) and 20 percent in 2020.”[6] 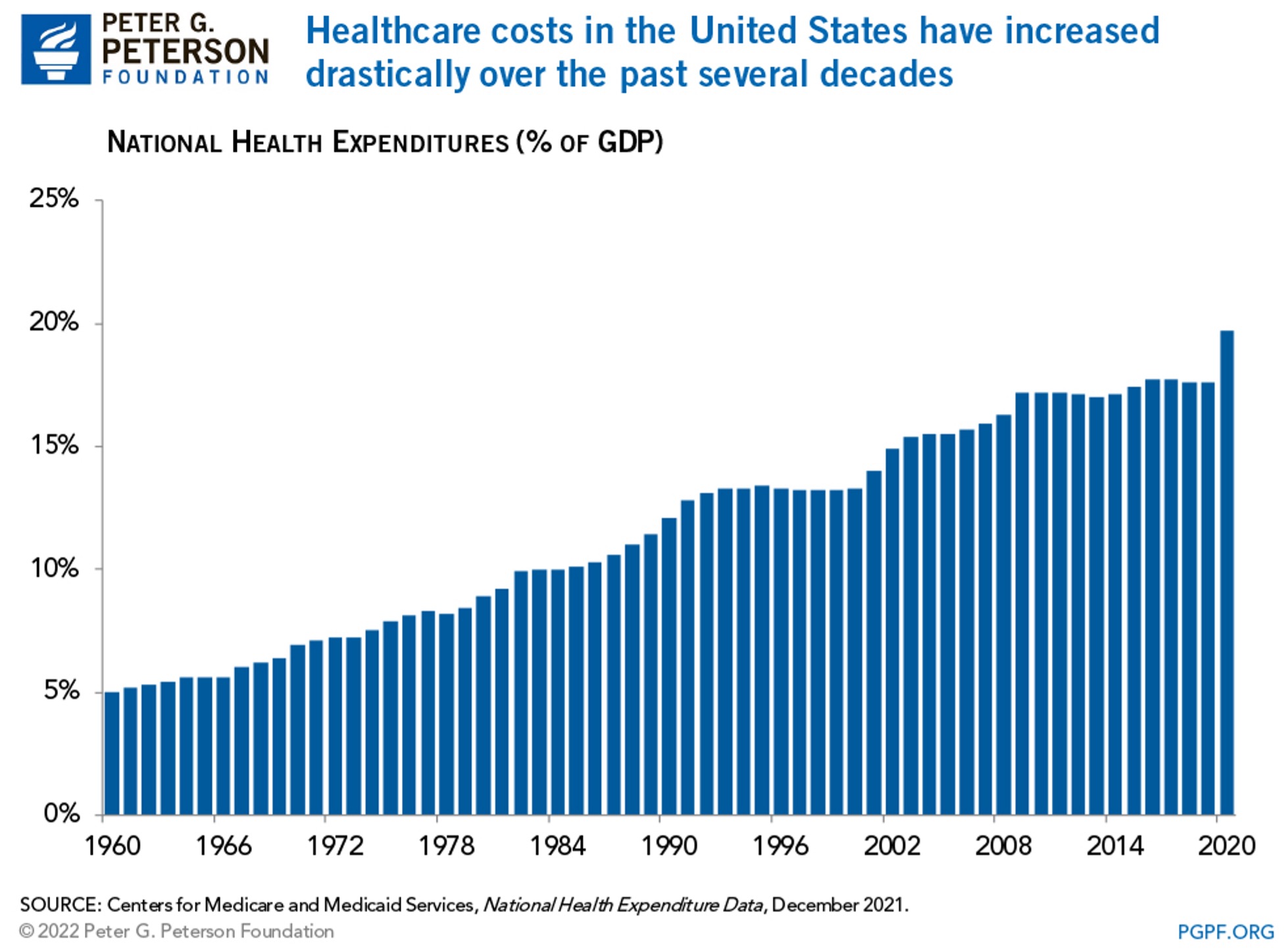 The primary factors identified as causing the rise in healthcare spending are an aging population (“Individuals age 65 and over are projected to account for 17 percent of the U.S. population in 2022) and increasing costs (“the average change in prices paid by urban consumers for various goods and services — has grown at an average of 2.1 percent per year while the CPI for medical care has grown at an average rate of 3.5 percent per year”).[7]

“The US clearly stands out …: Americans spend far more on health than any other country in the world, yet the life expectancy of the American population is shorter than in other rich countries that spend far less. … In the 1970s the US didn’t stand out at all, it does so now because life expectancy increased much more slowly than in other countries. At the same time, health spending in the U.S. increased much more rapidly, particularly since the mid-1980s.”[8]

The factors contributing to lower life expectancy have been identified to include smoking, obesity (“More than two-thirds of Americans (70%) are overweight and more than one-third (36%) are obese”), homicides (no wealthy nation has a higher homicide rate than the U.S.), opioid overdoses (“In the US the death rate has increased more than 10-fold since 1990, while opioid overdoses have remained an extremely rare cause of death in other countries”), suicides (“Suicides have increased slightly over the past generation in the US”), road accidents (“Deaths in road accidents are also much more common in the US than in most other rich countries”), poverty and economic inequality (“While Americans have a higher average income than people in most other rich countries, the incomes of the poorest Americans are lower than the incomes of the poorest people in other rich countries”), and access to healthcare (“Among rich countries, the US stands out as a country where the population does not have universal access to health insurance”).[9]

It is truly unfortunate that life expectancy in the U.S. is relatively low given the vast resources expended on healthcare. We have a healthcare system capable of providing the very best outcomes, albeit at the highest cost, but unevenly across the U.S. population.  The reasons and causes for low life expectancy are diverse and socio-economic while the high cost of healthcare arises from inefficient delivery and uneven governmental regulation.  We are certainly not getting what we pay for.

[1] Life expectancy at birth represents the average number of years a group of infants would live if they were to experience throughout life the age-specific death rates prevailing during a period.